Equalizers in Dual Voltage Systems: What and Why

When to Use an Equalizer in Dual Voltage Systems

Up until the 1950s, most vehicles had a 6V electrical system. Even in the days before light bars and cell phone chargers, that just wasn’t enough power. Newfangled inventions like power windows were stressing 6V systems to the max.

To meet the demand for more power, the auto industry standardized on a 12V system. That was 70 years ago. It’s no surprise that 12V just isn’t sufficient for many modern applications.

We could simply switch to a single 24V system, but not all equipment is capable of running on 24V. Not to mention that 12V components are actually more desirable for many applications. 12V lamps, for example, are less expensive and more durable than their 24V counterparts.

Dual voltage systems make it possible to use both 12V and 24V components, with two 12V batteries providing the power. However, simply wiring the 12V batteries in series and drawing 12V power at the junction between them can dramatically reduce battery life.

Battery Equalizer systems are a smarter solution for complex dual voltage systems. Here’s what you need to know.

What is a Battery Equalizer?

A Battery Equalizer is a specialized DC-DC converter, designed to convert electrical power from one voltage to another at high efficiency. They’re used to balance battery loads in dual voltage systems.

How Does a Battery Equalizer Work?

Why Do I Need a Battery Equalizer System?

Here’s what an Equalizer system looks like with two 12V batteries under a 12V load, with the engine off.

With the Engine On

When the engine is on, the alternator delivers 28V to the Equalizer. Since the Equalizer’s output is ½ the input, it outputs 14V to the A battery, with 14V running across the B battery is well. Since 14V is the optimum charge voltage for 12V batteries, both batteries are equally recharged. 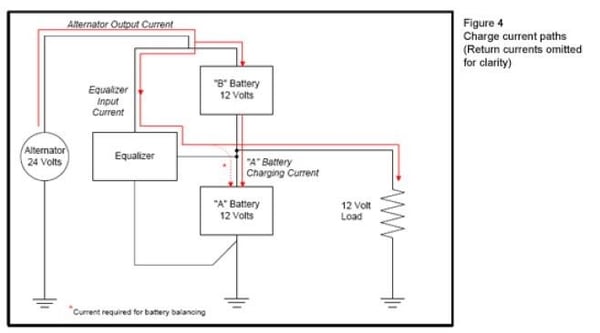 When Is an Equalizer System NOT the Best Option?

For the majority of 12V/24V applications, an Equalizer system is the right choice for maximizing battery life and meeting power needs. However, there are a few exceptions. For simple systems with low power demands, a simple converter may be more economical than an Equalizer system. Such applications include:

In these cases, an Equalizer can be part of the system, but a simple fixed-output converter would also meet the system requirements.

In addition to the power requirements, if your Equalizer will be operated in a high temperature setting, it will need to be de-rated — that is, operated at a lower output than it is capable of providing. In that case, you will need a higher output Equalizer than the 120% rule would indicate.

Dual voltage systems make it easier to choose electrical components that are the best fit for each application in your vehicle, without having to worry about 12V or 24V-only compatibility. A Battery Equalizer ensures that you can furnish enough power without draining, overworking or overcharging either 12V battery in the system.

Click through to see Waytek’s selection of Eaton’s Sure Power Equalizers.