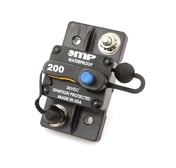 Circuit breakers are increasingly being used instead of fuses for transportation equipment of all types. Circuit breakers have many virtues: They're more durable, they're easier to reset and replace, and they can be ordered in types and sizes that work in most places where fuses would be used on vehicles.

A circuit breaker does exactly what its name says: When it detects high amperage or another electrical problem—usually a circuit heating up—it flips and cuts off the circuit, protecting sensitive electrical systems from damage. Generally, circuit breakers come in three different types based primarily on the way they reset after being tripped: Type 1 (automatic), type II (manual), and type III (push-to-trip). These types can overlap somewhat depending on the design of the breaker.

Automatic means a breaker self-resets without help from the user. A type I circuit breaker will provide continuous protection until the overcurrent is found and corrected, then it automatically resets.

Type I circuit breakers are generally used in applications with relatively low voltage and in places where it would be difficult to access a circuit breaker for a manual reset. You will often find them used to protect circuits that experience occasional overloads such as wiper motors, headlamps, and non-essential systems like device chargers. 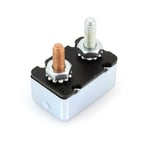 reset button. You must be sure to turn off the ignition or remove the overload before you reset a type II circuit breaker.

Manual circuit breakers provide a visual indication of a tripped circuit, saving you time when troubleshooting a faulty system. Type II circuit breakers are well-suited for systems that need breakers only when the engine is on, and for systems for which fuse replacement is not practical, such as sunroofs, power windows, and car seats. 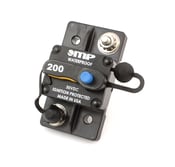 Type III Push-to-Trip circuit breakers are also manual in nature, allowing you test the circuit by pressing a button and tripping the circuit. The ability to manually close off the current makes type III circuit breakers ideal for safety because you can shut down the current without disconnecting the battery or turning off an engine. They include a visual indicator to show when the breaker is tripped—typically in the form of a lever that extends when the trip button is pushed. When you push the lever back in, it resets the circuit breaker. 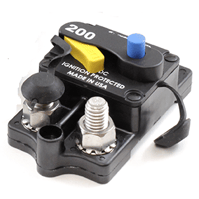 Example of a type III push-to-trip circuit breaker that has been tripped, with its yellow lever extended.

Also called “switchable,” push-to-trip is an especially important breaker type because it allows anyone accessing certain vehicle systems to cut off the power beforehand. Systems wired directly to batteries and other heavy shock risks will typically have push-to-trip breakers that prevent current from running through the system while under repair. Once the repair is complete, you simply “switch” the circuit breaker back to its rest state.

When choosing a circuit breaker, it's important to know your vehicle's needs and which circuit breaker type best corresponds to them. You must consider where the circuit breaker will be mounted, the current rating you need the electrical breaker to carry, the type of reset method, and any relevant SAE spec requirements. For further elaboration, see the article How to Choose the Right Circuit Protection Devices.

For information about the wide variety of circuit breakers available at Waytek, click here.