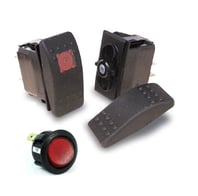 Switches—whether they're toggles or rockers, push-button or disconnect—are found in every 12-volt electrical system, doing everything from turning on lights to moderating critical systems. To understand the basics of electrical switches, you must first understand the circuitry inside, then be able to discern the differences between different types of switches. Here's a crash course.

Accordingly, single pole (SP) switches control only one electrical circuit; double pole (DP) switches control two, acting like two identical switches that are mechanically linked, and triple pole can control three. In automotive applications it is rare to see a switch with more than three poles. 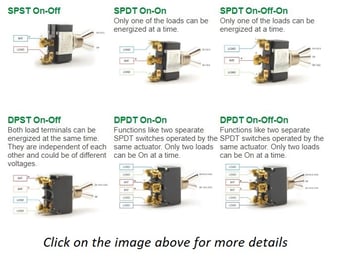 have a center position (usually configured as On-Off-On).

Two of the most common configurations are single pole single throw (SPST), which is  best known as the humble 'on/off' switch we use every day, and double pole double throw (DPDT), which allows for the use of tandem circuits. Shown at right is a chart from Littelfuse that illustrates the most common types of toggle switches.

Another circuitry consideration is how a switch is activated. A momentary switch is one that's only active when engaged by the user. Maintained switches, however, stay in the position you set them until somebody comes along to flip them back.

A momentary switch can often be used for winch controls, engine starters, and other applications in which you don’t want switch that could unintentionally be left on. An example from everyday life would be a doorbell switch, which is only activated as long as you press it.

How will you know which is which, beyond hitting the switch? Look closely at the text written on the switch; momentary switches will have their settings noted in parentheses, such as "(ON)". You might also see this noted as "mom on" or "momentary on.” A maintained switch would be simply marked "ON."

Here are some of the most common types of switches and their applications.

Rocker switches have numerous mechanical applications for automotive, machinery, and industrial use. They can be illuminated to indicate the on and off status, making them an excellent fit for dashboard functions such as lights and auxiliary applications. Rockers such as the 56027 / 58027 Series by Littelfuse (pictured at right) also work well in forward-reverse applications.

Toggle switches are manually activated by a lever or another

mechanism. While the basic light switch is probably the best-known example, toggle  switches can be utilized in almost any type of commercial vehicle application. Shown at right: The sealed model G-Series by Carling.

Push-button switches operate when activated by push, as the name suggests. Automotive horns are one common application for this type of switch; door jamb switches, such as the Momentary Door Switch by Cole Hersee (pictured at left), are another.

Momentary push-button switches constitute a popular sub-type of the push-button category. These switches have an exposed button raised further off the panel where the switch is mounted. They are often used for a machine’s most important functions, such as “Start” or “Stop.” Shown at left is a Pollak Momentary Start Switch.

Rotary switches, such as the V-Series Contura by Carling pictured here, are operated by rotation and used when multiple positions are needed. Rotary switches are ideal for on/off highway, marine, and testing equipment. Forward and reversing applications (for example in the operation of a crane or a boom) also utilize a rotary switch. 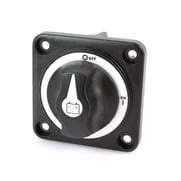 Disconnect switches cut off the electrical load going from the battery to the rest of the  system. Switches like the Terra SR Series from Cole Hersee (shown at right) are commonly used for safety and avoiding battery drain when a vehicle is idle for a period of time. Some disconnects offer additional features such as lock-out/tag-outs and detachable keys and handles.

Ignition switches provide reliable circuit control for vehicle ignition. Designed for universal  applications and to withstand harsh environments, they come in a broad range of configurations, with metal or plastic housing, sealed or unsealed, and with keys or levers. Pictured at left: A Cole Hersee 4-Position Heavy Duty Ignition Switch.

Switch terminology can be confusing, but it's easy to get the hang of, much like a switch itself. If you are in need of high-quality switches, no matter how many poles and throws, please view our complete selection of electrical switches, automotive switches, and power switches.