How to Choose Between Battery Isolators and Separators

Controlling parasitic loads (battery drain) and properly distributing electrical power is crucial to keeping vehicles working. However, this requires balancing the needs of the battery against those of the electrical system.

The addition of electrical loads such as lights, entertainment systems, communications equipment and 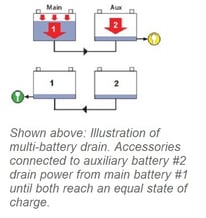 other accessories continue to draw power when the engine is off. For these applications, having a multiple battery system is essential. However, simply wiring extra batteries into a vehicle’s electrical system can allow auxiliary batteries to drain power from the main battery, inhibiting engine starting and other essential functions.

Managing multiple batteries is where battery isolators and separators come into play. Despite seeming very similar, however, they function in different ways.

Battery isolators are best seen as the distribution point of an automotive electrical system. Generally built with diodes, isolators ensure that charge is evenly distributed between multiple batteries and the alternator.

Many 12-volt electrical systems rely on at least one battery to start the engine and another to power accessories. This arrangement can present a problem when a fully charged battery is connected to a partially discharged or dead battery. The current in the fully charged battery will drain to the less-charged battery, until both reach a common lower charge level, or even worse, discharge completely. 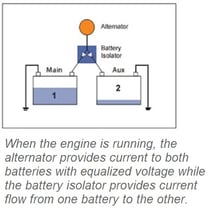 Regardless of how many batteries are available, the current flow from one battery to another will continue until all batteries in the electrical system reach the same charge level and may prevent the engine from starting.

A battery isolator can eliminate the problem of battery drain all together. The isolator's role is to allow the alternator to assist with charging the primary battery, while at the same time not allowing other loads in the charging system to drain the primary battery. By using diodes to allow current to flow only in one direction, a battery isolator prevents a fully charges main battery from passing current to a partially charged auxiliary battery.

With this setup, each battery is isolated and acts as an independent power source, allowing the main battery to conserve power for starting and essential functions. When charging, each battery receives the amount of charge it needs based on its own threshold.

Battery Separators, on the other hand, are best seen as switches that can direct current, enabling a primary and auxiliary bank of batteries to be charged from a single source using a solenoid. While prioritizing charging, a battery separator will charge the primary battery first and then the remaining auxiliary batteries.

When the engine starter is engaged, the battery separator monitors the voltage in both main and auxiliary batteries. If the separator determines there is not enough voltage in the primary source to perform an essential function, such as starting an engine, it will open the solenoid and allow current to flow from the auxiliary battery to make up the difference.

If the drain on the charging system by the auxiliary or main battery bank reduces the system voltage below a certain point, the separator will disconnect the battery banks from each other to protect them from excessive drain. To help avoid this situation, it can be useful to incorporate a low voltage buzzer alarm to notify the operator when the vehicle’s battery is becoming too low before disconnection happens.

Unlike the battery isolator, a separator will allow current to flow in the opposite 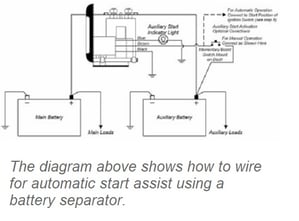 direction as well, so an auxiliary battery can recharge from the primary alternator or other source of power. Although this connection will stop when voltage reaches a certain point (typically when a 12-volt battery is charged to 13.2 volts), a damaged auxiliary battery can potentially drain the system. Thus, battery separators offer less protection against parasitic loads than battery isolators.

The primary difference between battery isolators and battery separators lies in the flow of current. An isolator works with a diode system that allows one-directional flow, whereas the separator has a solenoid function that can choose to pull power from either source.

One advantage of a battery isolator is that it requires no power when idle, while a battery separator draws a small amount of power even when at idle.

As you can see, isolators and separators have very different jobs, and how you use them will depend on the job and your power needs.

Isolators are ideal for systems with multiple batteries where redundancy is required, such as in utility vehicles that require a lot of engine starting and stopping during the workday. An isolator will ensure that no battery drains the others in the system, offering key redundancy in a system that needs either multiple backups or several batteries on one alternator. However, the fact that isolators charge all batteries evenly may not be ideal for some applications.

Separators serve as a reliable backup system with one auxiliary battery in which some parasitic load is acceptable. Crucial systems with strong (deep cycle) batteries can make effective use of separators, especially if the batteries need to be charged quickly or are intended to be used in parallel. For example, a separator would make sense in a dual battery system such as plow-equipped truck, ensuring maximum current to the plow via the extra battery, or at least as much as the system is physically capable of.