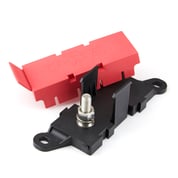 dropped directly into conductive paths due to their shape and size. When it comes to fuses and fuse holders—like the old song says—you can’t have one without the other.

Here are a few key things to know when choosing automotive fuse holders.

The Functions of a Fuse Holder

Next we will review the main types of automotive fuse holders.

In-line fuse holders are a simple wire-in/wire out, line-and-load type of fuse holder. Think of them as self-enclosed wire harnesses that are easy to install and access later. 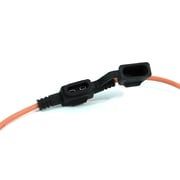 Today’s higher-quality in-line fuse holders have covers to protect against the elements, as well as built-in strain relief features to protect wires from fraying and breakage.

Shown at right: a Littelfuse MINI® In-Line Fuse Holder, which includes a snap-on cover and built-in strain relief to protect the wiring at both points of entry.

For higher-current applications such as battery and alternator connections and starter fusing, bolt-down fuses are typically used and require their own corresponding fuse holders. Bolt down fuse holders are typically designed to withstand harsh conditions and often come with high waterproof ratings. Many are ignition protected, a characteristic that can be essential for marine and high-temperature environments (see the related article Ignition Protection: Why it Matters).

Many bolt-down fuse holders are designed with dovetailed housing enabling multiple fuse holders to be latched together as a block. Others offer flexible covers that enable wiring to be brought in from any angle. 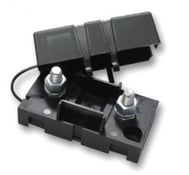 Right: A Littelfuse MIDI® High Amp Fuse Holder, with molded dovetailing on the housing that enables multiple holders to be joined together.

Below: A Littelfuse Flex-MEGA® bolt down fuse holder, with a flexible cover allowing wire entry from multiple angles. 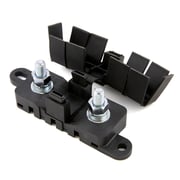 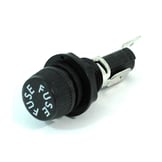 A single fuse can be handled by a fuse holder. For multiple fuses, there are many fuse blocks and fuse boxes available for both high and low-amperage fuses, enabling efficient multi-fuse installation and power distribution. Fuse blocks and boxes are ideal when working with complex electrical circuits in work trucks, emergency equipment, small electric vehicles, marine craft, and drilling equipment. 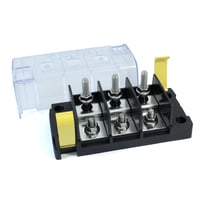 Right: An MRBF Surface Mount Fuse Block from Blue Sea Systems, ideal for marine use and designed to meet J1171 ignition protection requirements when the cover is securely latched.

Below: An HWB12 Series 12-Way Mini Power Distribution Center from Littelfuse, which accepts a combination of MINI® fuses, MINI® circuit breakers, and diodes. 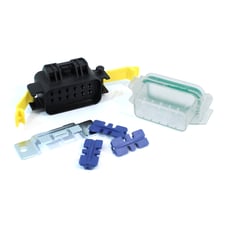 Most fuse holders have manufacturer specifications about the fuse types they were built to hold. However, take care to examine the fuse holder’s electrical ratings, such as maximum voltage and maximum current, to make sure it can support the fuse you intend to place in it.

Although we typically think of fuses (not fuse holders) as the devices providing circuit protection, fuse holders nevertheless play an important role. When chosen properly, a fuse holder supports the fuse in doing its job safely and efficiently.

You can see a complete selection of automotive fuse block terminals and fuse holders on the Waytek website. To learn more about automotive fuses, see Fuses 101: What You Need to Know.