Click to enlarge the chart at right. The two numbers after the letters “IP” indicate 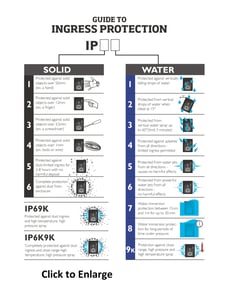 Why IP Ratings are Important

A manufacturer may advertise a product as "safe" or "waterproof," but when you're choosing electrical components for use in vehicles or mobile equipment, you need the reliable data that an IP rating provides.

How to Read IP Codes

A rating of IP69K, for example, indicates that a product that is highly sealed against both dust (“6”) and water “9K” (note that there’s no simple “9” water rating; the scale moves from 8 to 9K). The very highest rating—IP6K9K—indicates that a component is completely protected against dust ingress and close-range, high pressure and high temperature spray.

Typically, electrical components with ratings of IP65, IP66 and IP67 are considered dustproof and waterproof for use in work vehicles. All three codes have the highest “6” level of solid/dust protection. However, the term “waterproof” is defined in specific ways for each.

IP65 indicates protection against directed water jets of low pressure (6.3mm nozzle) from any angle. To take switches as an example, the moderately-priced rocker switch shown at right has an IP65 rating and would thus be able to withstand moderate water exposure in general use.

The next step up is IP67, indicating protection against full immersion up to a depth of 1 meter for 30 minutes. The Sealed Waterproof Toggle Switch from Cole Hersee, shown at right, is IP67 rated.

The next level, IP68, indicates that a product is protected against immersion at greater depths and higher pressure. The terms “greater depths” and “higher pressure” can vary in meaning depending on the conditions to which the component is subjected and the applications for which it is intended, as determined by the manufacturer. For more details, see the IP Code website. In any case, the IP68 rating indicates protection from immersion depths of at least 1 meter.

Finally, the IP69 rating indicates the very highest level of protection against dust and water ingress. Components rated IP69 would be appropriate for use in environments requiring heavy washdowns such as material handling, industrial equipment, construction equipment and on/off highway equipment where high temperature and pressure is applied in the cleaning process.

Right: The Cole Hersee SR Series Panel Mount Battery Disconnect Switch carries one of the highest IP ratings—IP69K—in its product class, meaning it is tough enough to withstand the most intense conditions of water spray and submersion.

How to Use IP Codes When Sourcing Components

Because IP codes are shorthand for the exact level of ingress protection a product provides, it’s important to know what you expect the part to be exposed to during standard operation. Before ordering a component, look up each element of its IP rating to ensure it adheres to the standards you need. Make sure the product is IP rated at a high enough level to withstand exposures to solids and water that you would anticipate during every aspect of its use and maintenance.