Stories emerging from the recent unrest in American cities include alarming reports of weapons stolen from police cars by rioters, in cities including Atlanta, Seattle, and Salt Lake City. In other reports, intruders have broken into locked police cars and circumvented gun locks, enabling them to steal weapons that had been stored “by the book.”

Theft of guns stolen from owners of private vehicles is also on the rise. In Atlanta, 1,021 guns were stolen from private vehicles in 2018 – more than double over 2009. In St. Louis, the number nearly tripled during the same period. As more individuals get gun permits and are storing handguns and rifles in their cars and trucks, the trend is likely to continue.

Now more than ever, it’s important to keep weapons out of the hands of people they are not intended for. The 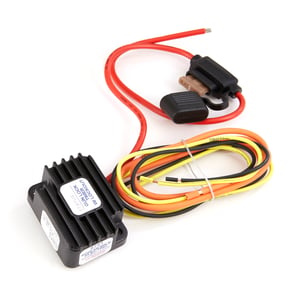 Police departments and other agencies often secure weapons using locking weapon mounts next to the driver or in the rear storage compartment of their vehicles. Weapons are typically locked and released by an electrical solenoid triggered by a discretely located release button. However, if a vehicle is broken into, many gun lock systems can be defeated by either locating the button or by “hot wiring” the gun lock release solenoid. The Advanced Gun Lock Timer’s lock-out protection completely shuts off electric power to the gun release solenoid, preventing intruders from activating or hot wiring it.

Manufactured by Egis Mobile Electric, the Advanced Gun Lock Timer is a solid-state relay that features compact, bulletproof construction, integrated thermal overload, and temperature resistant materials, enabling it to be mounted anywhere on the vehicle and hidden from intruders. And, with an extremely low power draw, it won’t drain batteries when vehicles are parked for long periods of time.

In addition to timed release window functionality ranging from 6 to 20 seconds, the module goes one step further: Users can pre-determine how long after vehicle shutdown before lockout is triggered, with options ranging from 15 minutes to two hours. This unique feature ensures that when the vehicle is left unattended, the weapon will be far less likely to be maliciously removed.

When an officer needs to access the gun locker, the time delay module can be overridden by turning on the vehicle ignition or by using a physical key.

The Advanced Gun Lock Timer does not require an ignition-switched input signal to operate, which could be difficult to set up in newer vehicles (especially in rear storage compartments). Instead, it utilizes a single 24-hour feed from the vehicle battery to sense alternator charge voltage to determine the vehicle operating status. To install, the Advanced Gun Lock Timer is simply connected to uninterrupted battery power, the gun lock release solenoid, and the weapons release button.

If a vehicle’s electrical installation contains additional components in the same area as the weapons mount and release solenoid, Egis Mobile Electric strongly suggests utilizing an “All-Upfit” battery switching and power management device (such as their 7601 or 7616 Time Delay Relay) and locating it in in a different area of the vehicle. By allowing the disconnection of all power to the area where the weapons release solenoid is installed, the ability to ‘hot-wire’ it is significantly reduced.

For more information about the Advanced Gun Lock Timer with Lockout Protection, go to the Waytek product page.