What Does "Solid State" Mean for Electrical Components? 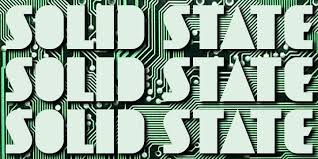 Any purchasing department is familiar with the term "solid state." Solid state electronics and circuits are fairly common in automotive electrical, but how well do you understand how this technology works, as well as the benefits and drawbacks? So let's take a look at solid state components, and what they mean for vehicles and engineering.

What Is Solid State?

Solid state electronics are built entirely from solid materials, with charge carriers kept within these making them substantially different from other common types of circuits, such as electromechanical. Also, solid state doesn't include items that have moving parts.

Usually, the term "solid state" is applied to crystalline semiconductors, but USB drives, and many other modern electronics are solid state.

And, in fact, you're seeing more and more solid state electronics in all sorts of surprising places in automotive. For example, vehicle electrical control systems use solid state relays designed to withstand the electrical environments typically found in commercial vehicles.

Why Is Solid State Better?

Solid state electronics first became popular because, compared to the electronics of the past, they're much more durable. The lack of moving parts reduces wear and tear, as well as the risk of mechanical failure. Granted, they're not invincible; extremely high heat, impact, and water and chemical exposure can damage solid state gear. However, solid state is still generally more durable than electromechanical technology over the long term.

It also does more in less space. the compact nature of solid state is naturally thinner and lighter than mechanical systems. Compare the newest generation of thin ultrabook laptops to the clunky computers of years past. Solid state memory is a big part of what makes this possible, as it allows for a much smaller form factor than the mechanical hard drives of the past.

Finally, it tends to use power more efficiently. While there's only so much output you can get out of any electrical system, thanks to physics, solid state equipment tends to give off less heat and light unless it's engineered to do so. It will still heat up, as the resistance of the system will cause components to get warmed as current is put through it. Some solid state systems will need heat sinks -- metal devices that absorb and safely release waste heat. But, as a rule, solid state systems get more out of each electron.

Solid state is increasingly the future of automotive technology. As vehicles are called on to go further and work harder on less fuel, or even trading in fuel for batteries, the power efficiency, and durability of solid state gear will make it more and more appealing for most applications. If you're ready to explore the usefulness of solid state gear, check out our collection of solid state relays, including these new products: